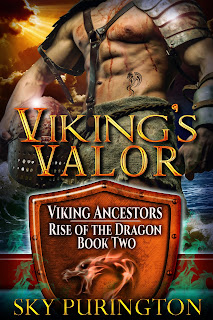 Cursed by her dragon ancestor, Sage is at the root of a burgeoning prophecy that threatens her sisters. The only way to protect them is to leave Winter Harbor, Maine, and travel back in time to tenth century Scandinavia. To travel back to Håkon and Leif, the men she left behind. Two warriors pitted against each other to win her over so they might strengthen their position in an ongoing war. Yet when she arrives, she’s captured by someone else entirely.

Set to annihilate his nemesis before he wreaks havoc and claims Sage as his own, Viking Håkon Sigdir pursues Leif. Until Sage is taken by Magnus of the Årud tribe. It then becomes a race to see who can save her first from the enemy’s rogue ally. A race that turns into a battle of wills as their rivalry for Sage intensifies.

Sparks fly as an age-old vendetta ignites a love triangle that threatens not just the fate of Håkon’s people but his very heart. Will Sage ultimately choose him or Leif? Will she see past the dark enchantment affiliated with her ancestor's prophecy and realize who is destined for her? Better yet, will she see clearly the evil imposter? Because if she falls for Leif’s mock heroism rather than Håkon’s genuine valor, the war will be lost.

“Yes, Siv and I shared love of a sort,” he agreed, not about to deny that lying with Siv had always been very good. “But not love like what I see between my father and Shannon.” He kept his eyes with Sage’s, remembering all too well the kiss they had shared. How strongly it had affected him. “There is something greater out there. Something different than what Siv and I shared.”
“Mating with another dragon,” she whispered. “But is that love? Or is it obligation?” She looked to the sea again and shook her head. “Sorry I said that. I was just thinking out loud.”
“Have you not seen love then?” he said softly. “Do your parents not share it?”
“They do actually.” She sighed and kept eying the water as she fiddled with her skin of ale but didn’t drink from it. “And they’re not both dragon so I know it’s as real as it can get between a man and woman.”
“So you do not think it can be real between two dragons then?”
“Honestly,” she whispered, “I’m not so sure.” Her eyes finally returned to his. “Everything that exists between two dragons, you and I, is pure DNA. Pure beast. It’s all automatic in some strange way…not as natural.”
“That is where we disagree,” he murmured. “I think it is more natural than what humans experience.”
“Maybe more instinctual,” she countered.
“That too,” he agreed. “But also…” he struggled to find the right words as he looked to the roughening sea, to the turbulent bubbling clouds on the dark horizon. “Mating between dragons is more than love. It is an experience of the flesh and soul combined with powerful ancestry that makes it something untouchable. Unique.”
“Might I speak bluntly?” she murmured. “About your birth mother.”
“Yes.”
“She wasn’t dragon, right?”
“No.”
“And she died when you were very young. She left you behind.”
“Yes.”
“Could it be, then, that you see more strength in a relationship between two dragons because you inherently feel they’re stronger,” she said. “That they won’t leave you behind. Like Shannon, your step-mother, who is still here to this day?”
He considered her, understanding the truth in her statement, but not of the same mind. “Elder Naðr ended up with Megan, a human. My grandfather ended up with my grandmother Veronica, a human and they shared a great love so I have seen how strong it can be.”
“What is it you are searching for, Sage?” he continued gently, pushing her comfort level because he had to. Because he needed to understand. “Why do you fear love?” Then he pushed it a little further. “Why do you fear us?”
“I never said I fear us.”
“But you do.”
“I might.”
“You do.”
She finally moved beyond a quick sip of ale and took a few hearty swigs before her eyes returned to his. “I suppose there’s something you should know about me…that you and your family should have known by now.”
She hung her head and inhaled deeply before she looked at him again and said the last thing he saw coming.


My review;
It is so hard to explain how much I love all of the books that author Sky Purlington has written. I have not read one page that I have not loved. When a time travel romance and a shape shifter meet there will be a great story. Sage has to do whatever she can to save her sisters. So, she travels back to the tenth century to the 2 she left behind. Leif and Hakon both seem to want her. But , she is captured by someone else and they both are trying to save her. Will she finally understand who really loves her? Will he be able to save her? Or will everyone die?I give this book a 5/5. I was given this book for a review and these are my opinions.

Sky Purington is the bestselling author of forty novels and novellas. A New Englander born and bred who recently moved to Virginia, Sky was raised hearing stories of folklore, myth, and legend. When combined with a love for history, romance, and time-travel, elements from the stories of her youth found release in her books. 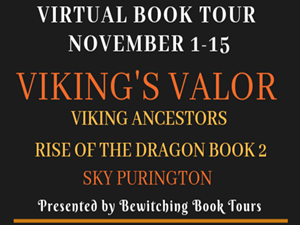