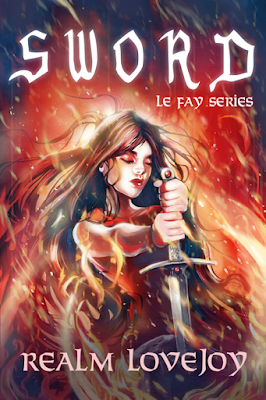 Evil lurks. Camelot sits, vulnerable. The fate of a future king hangs in the balance.After surviving a string of brutal trials, sixteen-year-old Morgan le Fay is an official member of Camelot. But beneath its shining façade, Camelot is a crumbling government where loyalties are divided.Nobody believes Morgan’s suspicions that enemies are closing in. Prince Arthur, a boy more interested in playing video games than ruling, will not listen to her, and neither will Lancelot, Camelot’s head of security. Even Morgan's friend Merlin refuses to take action.When Morgan discovers that someone is plotting to assassinate the future king, she must take her destiny—and his—into her own hands. With the sword Excalibur beckoning in the distance, Morgan embarks on a seemingly impossible mission. And before her journey ends, everyone will know what she is truly capable of . . .In this second book in the LE FAY series, author Realm Lovejoy takes readers deep into the heart of a splintering Camelot. ________Praise for the first book in the LE FAY series, Henge:"Camelot meets Hogwarts meets Panem in this intriguing, well-written beginning to a planned YA series."--Kirkus Reviews

Sword (Le Fay #2) Excerpt
When I glance at Lancelot, he is studying me like he thinks I’ve gone mad, and it occurs to me I probably have a dark expression over my face.
“Look,” Lancelot says, bowing his head slightly. “Before the final trial, I told you that I wanted you to not think of me as the High Knight behind closed doors. That maybe we could be friends. I’m not sure if what I thought at the time is possible, but for one minute, let me be an ordinary person interested in your well-being. You are too hard on yourself. You have a bright future, though you may not see it right now. I see it.” He puts his hand on his chest to emphasize his conviction.
Seeing him friendlier makes me squirm—it’s somehow worse than when he’s being tough on me. I want to scream and run out of the room and over the hills.
He walks closer to me and I’m afraid he’ll smell my sweat.
“You’re tortured to hear this,” he says as if he can see through me. “I don’t know what happened to you in the past and what you’re suffering from, but if you could just trust me, I’ll prove to you that you’ll find a fulfilling career in Camelot.”
Turning my head, I hold my thin gown closer against my chest, afraid that it’s not enough cover.
“Please,” I say. “I appreciate your words, but you don’t understand—”
There is a knock at the opened door. Father peers in.
“Everything okay?” he asks sharply.
He glances at me before eyeing Lancelot.
“Everything is fine, sir,” Lancelot replies and steps away from me. “Good day, Ms. Le Fay. Glad we have an understanding.”
I catch the questioning look Father gives Lancelot. For a second Lancelot looks insecure as he slumps his shoulders just a tiny bit. I realize then that Father intimidates Lancelot. Father was once a highly respected knight himself. Lancelot is still young after all, especially for the High Knight.
Lancelot gives me a curt nod as Father guides him out.
“Apologies for the intrusion, sir,” Lancelot says.
Father doesn’t look happy. “I understand your job. I once had to do similar tasks myself.”
As I hear their footsteps recede, I am left to face dread. I don’t know what ideas will spring from my mind to deal with this conundrum. But I know whatever course of action I choose to take will be my worst and best idea—terrible and unstoppable, like a forest fire. I know this but cannot do anything about it, just as a drowning person cannot help but try to stay afloat to breathe. This is my attempt to take a breath before sinking. To push past that strong current that keeps me in one place.
I take the statue of Astolat off my nightstand and hold on to her.
“Please… please,” I whisper to her. “Don’t let me…”
Don’t let me what?
What am I afraid of doing?

As my room darkens, the question haunts me. 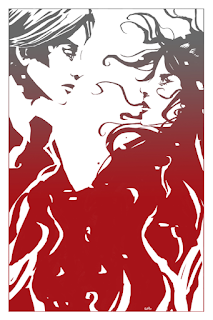 About the Author
Realm Lovejoy is a writer and an artist. She was raised in Washington State and the alps of Nagano, Japan. Her father is a Japanese ex-monk and her mother an English teacher from Rhode Island. Her art is influenced by both the East and the West.


Realm aspires to tell stories through her writing and art.
She is agented by Jessica Regel.
Her upcoming YA sci-fi novel is titled CLAN, due 2013.

GIVEAWAY:
a Rafflecopter giveaway
Posted by 3 Partners in Shopping at 9:04 PM