In the late spring of 1991, a flood and fire of historic proportions tore through the pretty resort town of Obergrande, New York, in the central region of the Adirondack mountains.

The twin disasters destroyed a large part of the east side of the town that bordered the Hudson River and Lake Obergrande.

In the aftermath, a new dam was built, and that damaged part of the town “drowned,” covered by the new, larger lake.

During that terrible flood, five kindergarten girls were trapped in their drowning school, huddled together as the water rose higher, rescued just in the nick of time. The nightmare bonded them, and three others like them, to each other for life.

These are their stories. 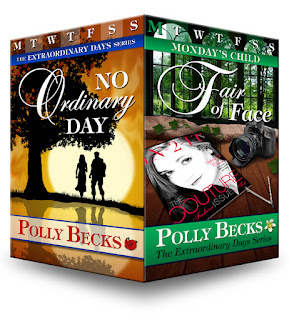 All excerpts are from the 3rd book in the series: Tuesday's Child: Full of Grace


In the blue light and wisp-thin clouds of this late June morning, Donovan Farrell, a wide-shouldered man in a leather motorcycle jacket and jeans tucked into heavy boots, came out of his motel room, his helmet in one gloved hand, directions in the other, a string-banded rollpack across his back.

He stopped, absently admiring the color of the sunlight on the clouds at the horizon, and took a deep drink of the morning air.

His hair, hanging long in dark brown waves that matched his heavy, somewhat unkempt beard, caught the wind and danced around his head for a moment.

Donovan, known as Van to the few people who knew him, set his helmet down on the bike that was parked outside his room, a Yamaha FZ6 in the same gleaming black as the full-face helmet, and stuck the paper on which he had jotted down the directions inside it for the moment to keep it from flying away in the breeze.


He drew his hair back in a hair tie so that it was out of his face, retrieved the paper, then pulled the helmet on.

Scanning the directions again, Van made a mental note of the route he planned to take, as he did each time he got on the bike.


He was avoiding the New York State Thruway, partly because of the expense, partly because the eastward drive by way of Route 20 was more scenic and offered more opportunities to stop, stretch, and eat over the course of the day.


And partly because, unlike the Thruway, Route 20 was quiet and mostly empty.

It added a couple of hours to his trip, but Van was not in a hurry.

He had nothing but time now.

He looked at the destination, which he had underlined several times upon writing it down.

Then he got on the motorcycle, started it up, and headed east.


Polly Becks has been making her living writing for more than twenty years, as well as working as an editor, curriculum developer, and teaching secondary-school Spanish. She has more than 350 books to her credit, mostly educational materials, as well as professionally published fiction in both the adult and YA market in a variety of genres, plus more than 30 Children’s books. She is excited about exploring the digital literature frontier and is honored to be the launch series for GMLTJoseph, LLC. - See more at: http://www.pollybecks.com/author/#sthash.pEZ6f3xO.dpuf

Polly is awarding one randomly chosen winner via Rafflecopter one 3-foot long stem rose in a glass vase from TheUltimateRose.com or similar florist; US only

a Rafflecopter giveaway
Posted by 3 Partners in Shopping at 12:00 AM