What I loved most about this book, besides the story itself, was the great descriptions of Arizona and the scenery. I also loved that the book had a lot of Arizona history included in the story.
~Book Splurge

I really enjoyed this mystery with all the extra information and history.
~Laura’s Interests
The story is a fast-paced, adventure. It keeps you guessing…
~Socrates’ Book Reviews… 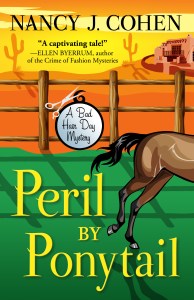 Marla and Dalton’s honeymoon at an Arizona dude ranch veers from dangerous to downright deadly faster than a horse headed to the corral. With her husband’s uncle–the resort’s owner–on the suspect list for murder, Marla races to prove his innocence. She hopes her blind trust isn’t misplaced, especially when she learns their relative has secrets he’d rather keep buried. As the bodies pile up, she digs deep to find the killer. With her new family in jeopardy, she’d better figure out who’s adding to the spirits haunting a nearby ghost town before someone she loves is hurt. Saddle up for Marla’s latest adventure in the Wild West where a Bad Hair Day is the least of her worries.


Have you ever considered a dude ranch vacation? Does this notion conjure up a dusty resort with horseback rides and trail hikes for entertainment?


When I did research for Peril by Ponytail, I had to stay at an Arizona dude ranch. In the story, Marla and Dalton Vail honeymoon at a resort owned by his Uncle Ray. Accidents plague the ranch along with a nearby ghost town that Ray is renovating. My expectations for our stay included horses and rodeos, so I was pleasantly surprised by the other activities available for guests. Educational lectures, spa treatments, fishing trips, and gourmet meals were some of the choices for visitors at the Tanque Verde Ranch in Arizona.


Imagine my delight to see green trees and plants gracing the grounds. Single-story pink adobe buildings are sprinkled along twisting paths amid desert-type gardens. I got my daily exercise just by strolling up and down the hilly roads. See my Dude Ranch photo album here: https://www.facebook.com/NancyJCohenAuthor


Private haciendas overlooked Saguaro National Forest with mountains beyond. We stayed in a casita that had a rustic bedroom suite, dining alcove, kitchenette, sitting room, and modern bathroom facilities. Notably lacking was a television. Daytime activities ranged from riding sessions to nature hikes to lounging by the pool, playing a round of tennis, or getting a massage. I particularly liked the nature center where a naturalist described the wildlife in the area while I admired museum-like displays. Evenings might find you at an outdoor barbecue, attending a lecture, hanging out in the saloon, or admiring the view from your private patio.


Although I’m not a horse person, staying at a dude ranch grew on me. The breathtaking scenery, the tranquility, the pampering, and the delicious meals were enough to make me want to return. If you wish to get away from it all and be close to nature, consider a dude ranch vacation.


So what happens to Marla and Dalton on their Arizona adventure? Mishaps include Dalton finding a rattlesnake in his suitcase, somebody setting fire to their hacienda, Marla seeing a ghost, and a dangerous incident on the riding trail. Who is causing the sabotage? Suspects abound, including Dalton’s uncle who has a family secret to hide.


Hoping for a romantic honeymoon at an Arizona dude ranch, hairstylist Marla Vail and her husband Dalton arrive to find a series of mishaps plaguing the resort. A nearby ghost town is suffering similar problems. Is it mere coincidence that Dalton’s Uncle Raymond owns both properties? When Raymond asks for their help in finding the culprit, Marla and Dalton eagerly accept. Then news of a local forest ranger’s death raises the stakes.


With sleuthing more natural to Marla than horseback riding, she delves into the investigation. But as she digs deeper, she discovers skeletons in the family closet. Someone means to drive Raymond out of business, and the reason may be linked to his past misdeeds. Raymond isn’t the only one with secrets. The trail leads Marla from an environmental activist group to saguaro poachers to water rights proponents to an abandoned copper mine beneath the ghost town. She’d better saddle up, rein in the clues, and find the killer before she becomes the next spirit inhabiting the haunted hillside. 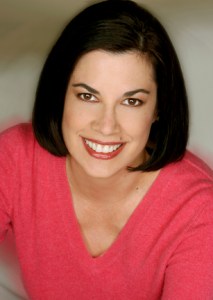 Nancy J. Cohen writes the humorous Bad Hair Day mystery series featuring hairdresser Marla Shore, who solves crimes with wit and style under the sultry Florida sun. Several of these titles have made the IMBA bestseller list. Nancy is also the author of Writing the Cozy Mystery, a valuable instructional guide for writers on how to write a winning whodunit. Her imaginative romances have proven popular with fans as well. Her titles in this genre have won the HOLT Medallion and Best Book in Romantic SciFi/Fantasy at The Romance Reviews. Active in the writing community and a featured speaker at libraries and conferences, Nancy is listed in Contemporary Authors, Poets & Writers, and Who’s Who in U.S. Writers, Editors, & Poets. Currently, she is serving as President of Florida Chapter Mystery Writers of America. When not busy writing, Nancy enjoys reading, fine dining, cruising and outlet shopping.


a Rafflecopter giveaway
Posted by 3 Partners in Shopping at 11:59 PM