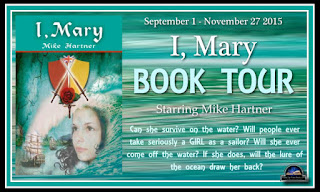 
Mary Crofter's first trip on the water was just after her first birthday, when her parents came from her birthplace in Kilwa to Portsmouth. She's been on several trips from Portsmouth to London and other places since. She loves the water and the water seems to love her. Can she survive on the water? Will people ever take seriously a GIRL as a sailor? Will she ever come off the water? If she does, will the lure of the ocean draw her back? 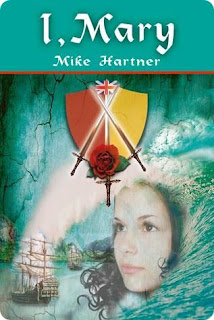 I looked upon the gray waters that surrounded me. To the west it was dark and cloudy, the wind blustering. But as I braced myself against the gale hitting full force against my peacoat, I smiled.


It was fitting that I was here, and nothing could ever convince me otherwise. I’d been birthed on land but it wasn’t long afterward that I was on the water—and acquiring my sea legs. From the time I could walk, I learned to balance myself on the uneven deck. And later to climb the gnarly spars and ultimately the sayles. My parents taught me my numbers and to read and write as well. Numbers, well, was my best subject, and I was good at that. But my time at sea was what I loved the most. In truth, the only fun I remember in my childhood was when they took me on our merchant ship from our home in Portsmouth to London or to Bristol. It wasn’t the location that I liked or the end of the journey; no, for me it was the sayling, standing on the deck, listening to the wind, watching the ocean and the clouds and . . . late at night . . . the stars. I wanted to be on the sea forever, and I knew this from my very first time aboard ship.


I remember very well every one of those trips, because during each voyage I would close my eyes and concentrate, and it was as if I were talking to the water. And through a combination of waves and the ship’s motion, it felt as if the sea was in turn communicating with me.


I recall all of the journeys with my father and his good friend, Captain Jose. The saylors on those ships were always good to me, and I came to respect all of them. They taught me sayling while they went about their own jobs. Even as a little kid I was taught how to tie knots. And when I was eleven they instructed me on how to throw knives and swing a cutlass. Soon afterward I was taught how to prime, load, and shoot a musket. But I turned up my nose at the musket, even the smaller flintlock pistols. To me, there was no honor in this sort of fight. No great talent was needed to shoot somebody. Any idiot could pull a trigger. In my mind, it required real skill to defeat a man, or woman for that matter, with a cutlass. And, yes, I will take up swords against a woman. Because, you see, I am one also.


Captain Jose had been a friend of the family since before I was born. He’d sayled with my father, James, and my mother, Rosalind. I heard the stories of the trip from Kilwa, where I was born, and then to Portsmouth, where we now live. I don’t know how they originally met because I haven’t been told that yet, but Captain Jose is so close to the family that I’ve always called him Uncle Jose or Uncle for short.


Currently, I am not quite twelve years old, thin as a rail, a little over eleven hands high, and maybe weighing four stone soaking wet. My hair is long enough to wear tied behind so it looks like the tail on a pony, but many men wear their hair the same way, so no one would know I was a girl just by looking at me.


I was in the office of Crofter Shipping Yards one day when Uncle Jose called me to him said, “Come over here and sit down.” He was always so nice to me that I never hesitated at any request of his, so I took a seat next to him. He gave me a funny look, kind of sly but not really since he smiled right away. “I’ve already talked to your parents, and both James and Rosalind agree with me.”


I looked at him and fidgeted, not having a clue what he was going to say next.


“You’ve sayled with your father and me all your life. We brought you to Portsmouth on a carrack many years ago. You’ve been on the caravel we sayled to Le Havre and on a special boat too, a cog—the one with just one sayle—when we sayled to London.”


I nodded at him, but I was confused. Had I done something wrong?


“Mary, there is a caravel that will be leaving these shipping yards in a little over a week. It's headed to the north of Scotland. Seldom do pirates sayle these waters, so other than weather it will be relatively safe and . . .” My eyes widened. Was I getting the right message? Was he really doing this? Was he really going to make my dream come true? “If you should be interested, I can schedule you to take your sayling tests in the next few days so you can be on that caravel and start out as part of the crew on this trip. This way, you can see if sayling is really what you want to do.”


He laughed. “Then let’s go get you some sayling clothes and set you up to crew on your very first ship. Then I’ll introduce you to the captain.” I jumped up from my chair but Uncle Jose pointed to me so I’d retake my seat. His face turned solemn, almost to a frown. “There’s something we need to discuss, and this won’t be easy to talk about. I brought this up this with your parents, and they told me to go ahead and tell you.”


Uncle Jose’s change of attitude was so great that I was startled. “I don’t understand.”


“I’ve already spoken to the captain, since I assumed you’d say yes. And he assured me that his main crew will respect you as a girl and also as a Crofter. But there are always new men brought on board. And even though the regular crew is honorable as far as this captain knows, they are still men of the sea. Mary, do you understand what I’m saying to you?”


“Your crew was always wonderful to me.” As soon as I said this I started to think back to all the times the men had helped me.


“You were a young girl who was the daughter of the owner of the ship, and I was the captain who knew each man well. If anyone had stepped out of line, he would have been run through or thrown overboard. This will be different, and you must understand that you are older now, almost a woman if you aren’t already. I don’t know how else to put it, but to say you will have to be on your guard at all times. The captain will have a couple of his most trusted men watching over you, but even a caravel is a big enough boat that . . . well, no person can be looked after day and night.”


I hadn’t given what Uncle Jose was talking about a single thought, but I wasn’t scared. “I’m not saying I can take down a saylor, but I know how to defend myself, and Mother has taught me how to hurt a man where it hurts the most.”


Uncle Jose let out a muffled laugh that might’ve been a groan. “Always know who’s around you, and be aware that you’re going to constantly have to prove yourself.”


“Yes,” he came back just as fast, but then he smiled and showed his big teeth. “Just be aware that nothing I have said was with the intent of trying to talk you off the boat. I just don’t want you—”


“Uncle Jose, I’ve heard the men talk on the boats since I was first able to walk the decks. Sometimes I’d hear things that I know I wasn’t supposed to, and as I got older many saylors didn’t even think I was not one of them, so I’m not unaware that men are going to be men at times. I can handle myself, I promise.” 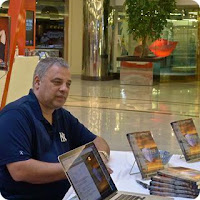 
Mike Hartner was born in Miami in 1965. He's traveled much of the continental United States. He has several years post secondary education, and experience teaching and tutoring young adults. Hartner has owned and run a computer firm for more than twenty-five years. He now lives in Vancouver, British Columbia, Canada, with his wife and child. They share the neighborhood and their son with his maternal grandparents.


His latest book is the historical romance, I, Mary.