The Legend of the East Road by Hamilton Hill Cover Reveal

The Roads of Luhonono: LEGEND OF THE EAST ROAD by Hamilton Hill
September 24, 2015
Cindy Bidwell 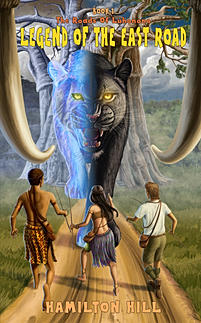 The Roads of Luhonono: LEGEND OF THE EAST ROAD by Hamilton Hill
Cover Reveal: September 24, 2015
Genre: Middle Grade Paranormal Adventure Novel
Publisher: Finerose Publishing
Date of Publication: October 1, 2015
There are so many awesome elements to this cover, I’m not sure where to begin?
The most central and prominent feature is the tiger / leopard / cheater / puma; I’m sorry I can’t talk with greater authority, the animal in some sections appears alternatively striped, dotted and black. I love the ambiguity of its species, it highlights a sense of curiosity about the overall image. The blue tinge to its entire left hand side adds an other worldly quality to the beastie, giving credence to the magical elements indicated in the summary.
The large overwhelming tusks that come down from above and fill the top outside of the picture demonstrate that there is even more to this story. It’s both in your face and implied, at the same time.
The summary alludes to the significance of the tree which is given weight by it’s central location but  it then becomes more suggestive with it’s placement in the background. Add to that the main beastie appearing disproportionately large in front of it… and it become an even greater suggestive element. Are there doors in the tree? Check the hind quarters of the beastie for what appears to be entry ways to it’s inner most arboreal secrets.
Three main characters, different cultures and sexes - this could truly be a story for all.
I can only hope the story is as subtly involved as the cover - OUTSTANDING!
Teaser
“Have you ever seen a princess take a bath?” Gimbo asked Peter. Peter shook his head.

“Ah,” Gimbo said, “then I’ll take you to the river. I know a spot where we can hide in the bush and watch her.”

Gimbo smiled teasingly. “You’ll see her when you see her. I’ll take you there tomorrow.”
Giveaway (Open Internationally)
Enter to win a Signed Paperback Copy
of
The Roads of Luhonono: LEGEND OF THE EAST ROAD
by
Hamilton Hill

Summary
MIDDLE GRADE FICTION: The amazing adventures of three would-be adventurers and their quest to find a mysterious princess. THE LIVING When engineers start to build roads in Luhonono, strange things begin to happen. Ancient spirit legends start speaking to thirteen year old Magdalene sending her and her two companions, Peter and Gimbo on a mysterious mission. They soon discover that everything in Luhonono is not what it seems to be. The actions of an evil witchdoctor—‘Moja’ sets them on a course to find the Legend of the East Road. THE UNSEEN At the beginning of time, the ancient ancestors of Luhonono combined their souls to sprout a giant Baobab. Within its roots they placed a spirit mirror to separate the living from the dead. For centuries this power had been protected by M’tuna “The Gatekeeper” but now, the building of a new crossroad junction at the tree, causes upheaval and weakens M’tuna’s powers. Moja intends to take advantage, and turn the spirit mirror upside. His ritual will release an army of demons to help him take control and rule Luhonono. THE TEAM Magdalene, Peter and Gimbo start off on an innocent quest to find a princess only to discover a place of ancient dreaming, ritual and lurking evil. To save the village Magdalene, Peter and Gimbo must search for the animal legends that will help them overthrow the evil witchdoctor and kill his conjured demons.
Author Bio
Hamilton Hill is an independent West Australian writer, philanthropist and fundraiser for good causes.
An ardent traveller he has visited over 453 cities in 51 countries and lived in 17 of those cities in 5 different countries.
He specializes in writing novels set in the places that he has been and about the things that he has seen. All of his writings, including The Roads Of Luhonono are fiction based on fact.
Twitter I Facebook Author Page I Facebook I Goodreads I LinkedIn 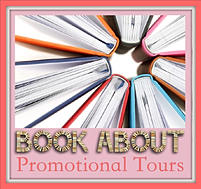 Tags
Cover Reveal
Posted by 3 Partners in Shopping at 9:03 PM