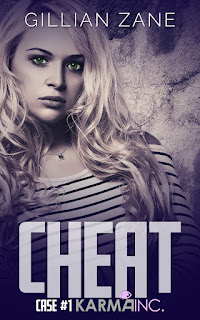 
Working for Karma Incorporated might sound like the best job in the world, but there’s one really big catch: you’ve got to die to get it. Cassandra Mercier died at the ripe old age of twenty-one and is now gainfully employed by the Afterlife Corporation as a Karma operative. Her job duties include manifesting bad karma on unsuspecting victims.


Two months into her internship Cassie is promoted and given her first solo case. His name is Bishop and he is a cheat.  He needs some bad karma, and Cassie’s the right girl for the job.


Inflicting a bit of payback on this cheat should be easy for Cassie, so she gets permission from her boss to do a little investigating on her own time. Investigating into her living life, the one she can’t seem to remember. The only problem, she is forbidden from doing the digging herself. Afterlife Corporation rule. She can hire someone to look into it for her, though, and that someone turns out to be Drake Greco. She regrets her decision the moment she walks into his office…


Gillian Zane is the author of the NOLA Zombie series. Zane is the pen name of a prominent blogger in the publishing industry, which will remain a mystery unless you Google it. Since she can remember her goal has been to become Master of the Universe and has decided to focus first on the literary world. Things are progressing nicely.


Zane has been a freelance writer for the last ten years and has published a few non-fiction works, none of which was very exciting. Zombies are much more exciting and a way for her to combine her two current obsessions, hot boys with guns and Doomsday Prepping. When she isn't stockpiling MREs (Meal's Ready to Eat) or researching how to build a cistern on a budget, she's taking care of her little family and exploring the city that she loves, New Orleans. You can find Gillian Zane on twitter @GillianZane.