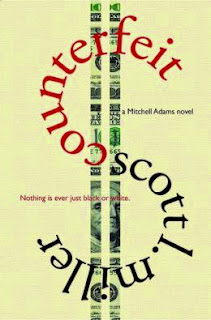 What if a man with the talent and patience to create perfect, undetectable copies of US hundred bills carries out his plan? Has a crime even been committed? What if he never spend a dime of the money on himself?
The last person social worker Mitch Adams wants to hear from is St. Louis Homicide Detective JoJo Baker, a man with whom Mitch shares a tangled past. Baker wants Mitch to see Lonnie Washington, a disabled African-American arrested for counterfeiting and armed robbery, believed to be suicidal while he sits in jail awaiting trial. The evidence points to an open and shut case, but Baker insists it's not so black and white. Reluctantly, Mitch agrees and discovers there is more to the story--more than enough to get them both killed. At first Lonnie won't cooperate, but as he begins to open up, Mitch comes to believe that the true criminal may not be the man behind bars, but the prosecutor who put him there--a man with far-reaching political ambitions, the approval of the public, and his very own Secret Service detail. With millions in perfect fake $100 bills up for grabs, Mitch's life hinges on the word of a counterfeiter, the greed of a prosecutor, and his refusal to go down without a fight.

Rain dripped from the concrete fangs of two massive lions standing guard at the Gateway City Jail. I hurried up the steps between the imposing Doric columns. What a dinosaur. The new county jail is a spa compared to this.
After getting through the metal detector screening line, I walked down a cold, shadowy hallway that smelled of old building, institutional cleaning fluids, and stale city air. Dust motes shone and drifted like dying fireflies in the slivers of light slanting through the high, narrow windows. The closer I came to the visitation area for the special lock-down unit, the smell changed to fear and the windows disappeared.
This is the end of the line.
Last year I was nearly an inmate here. 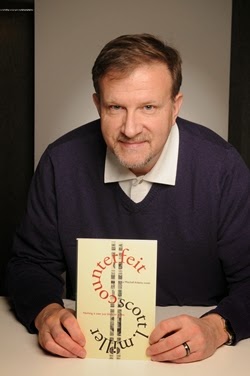 A licensed clinical social worker, Scott L. Miller earned his Master's in Social Work from St. Louis University and has worked with adults, children and the elderly in state and private hospitals in St. Louis city and county. Long fascinated by the workings of the human brain, he quit writing exceptionally bad poetry and studied fiction writing under the late John Gardner and later at Washington University. His first Mitch Adams novel, The Interrogation Chair, was self-published in May 2011, has been rewritten and is due for re-release by Blank Slate Press in October 2014 under the title Interrogation. Counterfeit is the second in this series, but is a stand-alone work. Counterfeit recently took third place in the Walter Williams major work award contest at the 99th Missouri Writer's Guild workshop for Missouri's published authors. Miller is currently working on his third Mitch Adams novel, working title The Virtual Suicide Machine, which is slated for release in 2015 by Blank Slate Press.

My review;
This is the kind of book that keeps you guessing with twists and turns.  The novel is full of suspense and fear. Mitch Adams is a social worker who is asked by a person from his past to meet with a man to try to help him.    JoJo Baker wants Mitch to meet  a man named Lonnie who is under arrest for armed robbery and counterfeiting. Detective Baker thinks there might be more to this story. Before long Mitch and Baker are in trouble. I loved the storyline and the characters. They are all strong. This is a thrilling read with plenty of action.   I give this book a 4/5. I was given this book by Partners in Crime for the purpose of a review and all opinions are my own.
Posted by 3 Partners in Shopping at 12:58 AM