From Chaos To Cosmos by John Kaniecki Book Tour & Giveaway 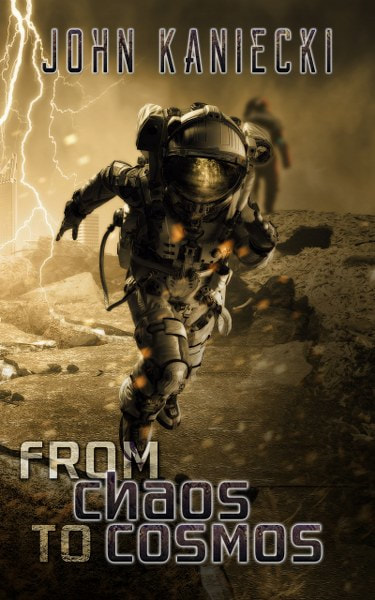 From Chaos to Cosmos
by John Kaniecki
Genre: SciFi

A collection of 9 short science fiction stories by John Kaniecki.


GROG VERSUS GROG
One of the world's fiercest assassins fights his worst foe ever, his clone.

Grog is cloned and he wants to kill his clone before his clone kills him.

THUNDERBIRD
The Wheel of Life is in spin and the United States government wants to rig the game.

ThunderBird is the center of an intense government program. His every breath and heartbeat is monitored as the Native American's mind is manipulated. After all ThunderBird has a godlike power that whatever he writes down on paper becomes reality.

SHIFTING SANDS
A story of an extremely intelligent fool.

Walter Gardner is an archaeology student at Earth University. Not only is he super intelligent but he is a hard worker as well. A combination that should spell success turns into ruins as Walter seeks to find the truth in history, and truth is dangerous to a government built on lies.

THE DRONES OF VENUS
The Drones of Venus are the most beautiful ladies of the universe but they come with a high price.

Harold Levy is a rich businessman that has everything in life except true love. Thus he covets the marriage of the most beautiful group of ladies ever 'The Drones Of Venus'. Harold's quest brings him to the moon to conduct his illegal business, where he learns a harsh lesson in true love.

ANARCHY IN THE YEAR 4020
To be a visionary in a blind world.

Planet Earth is doing just fine as long as you don't have any morals! But Michael McGhee and his small anarchist collective plan to change the world with their liberating message. There is certainly anarchy in the year 4020 in more ways than one.

THE FURY OF THE SHEEP
There is corruption at the highest ranks.

Ed Nokes shows a remarkable ability to encourage his workers. As such he gets the attention from his higher ups in the union. But not only does Ed get inspected but Ed gets a rare glimpse at the upper echelon of the union and sees their betrayal. Thus the union must answer to the 'fury of the sheep'.

THE INTELLIGENCE OF DOCTOR GOODMAN
Doctor Goodman prisoner of the military industrial complex by his brilliant mind.

Doctor Goodman is the mind that creates the bigger bang in the bombs of United States military. When he becomes disillusioned and wants a vacation he is denied and becomes a prisoner of the military base he does scientific work on. But don't count out 'the intelligence of Doctor Goodman".

IF I BE HUNGRY
Selena, a powerful business woman, has a dead heart that comes alive in a rare moment of compassion.

Selena is visiting yet another world on a business trip. After insulting some loser in a bar she is told that the bum is the brother of a local Mafia chief. Selena giving some mobsters a slip goes into a church where she hears a message that changes her life, at least for a moment or two.

TIME BOMB
What kind of bomb could destroy the whole world? Find the secret of the Time Bomb.

Two F.B.I. agents are on a stakeout but one and one equals zero. Despite finding the target with the 'time' bomb they are not allowed to make the escape. The two agents speculate that somehow C.I.A. involvement have ulterior selfish motive and are willing to risk a big bang in the process.

John Kaniecki was born in Brooklyn, New York. Though having no memories of life there, John is proud to be called a Native New Yorker. John was raised in Pequanock Township, New Jersey. At age twenty John was baptized and became a member of the Church of Christ. Presently John resides in Montclair, NJ and lives with his wife of over twelve years Sylvia. The happy couple attend the Church of Christ at Chancellor Avenue in Newark, NJ. John is very active in outreach and teaching as part of the leadership of the congregation.