The Greatest Prospector in the World by Ken Dunn Book Tour, Review and Giveaway 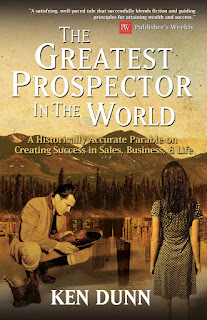 Book Description for The Greatest Prospector in the World:


Laura
Dunagan, was born in the gold prospecting days of rustic Alaska in the
early 1900's. When Laura was 14 years old, her father was trapped under a
mudslide while prospecting in a nearby river and died. Laura was forced
to move to Chicago in the care of her rich Uncle Joe. Laura hated Uncle
Joe because he forced her to leave the river, but also because he had
left the family prospecting business to move to Chicago years before she
was born.


Laura
discovers that Uncle Joe made his fortune selling insurance and was the
owner of the largest insurance company in Illinois. While wandering
through the mansion one day, she found Uncle's Joe personal den. In it,
she discovered an entire new life that would lead her to heights that
she would never had realized panning for gold in Alaska. Uncle Joe used
the 6 gold prospecting rules for safety to prospect new clients for his
insurance company and in doing so, discovered the secrets to wealth in
selling.

Ken
Dunn is one of the leadership training world’s up and coming great
speakers and trainers. An incredible hunger to learn and teach others
has led Ken successfully through five different professional careers in
the past 25 years.

Ken
began a policing career at the age of 18. He was involved in the
policing world’s most exhilarating and challenging disciplines,
including undercover drug and surveillance work, S.W.A.T. teamwork,
aggravated child abuse, frauds, aggravated assaults, illegal weapons
smuggling and homicides.

Today,
Ken regularly speaks to groups in the direct sales, mortgage, insurance
and banking industries. He uses humor and his own experiences to
inspire audiences around the world. Ken lives in Toronto, Canada, with
his wife, Julie, and children Matthew and Laura.


Laura Dunagan is only sixteen years old and she is living in Alaska with her father. He is a gold prospector until one day when he is killed while he is working. The man she really hates, her Uncle Joe shows up and tells everyone that she is going with him to Chicago, no matter what she wants to do. Once there she makes everyone miserable like her. Uncle Joe lives in a mansion but she doesn't seem to care. She only gets interested when she finds out that he owns the biggest insurance agency,in the state. Uncle Joe shows her how to make money and get rich. Now he is showing the reader how to grow a business and make money, too. If you follow his secrets you will also do better. I really thought that this was a unique approach to talking about how to make money. Six wonderful secrets are shared with us the readers. This is very easy to follow and understand. I think that this book is very interesting, I give this book a 5/5. I was given this book for  a review and these are my opinions.