Not by Sight by Kate Breslin Book Review

Not by Sight by Kate Breslin 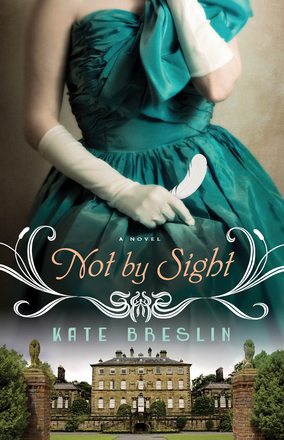 "Downton Abbey meets The Scarlet Pimpernel in Kate Breslin's wonderful historical novel set amidst the drama of England's World War I home front."--award-winning author Elizabeth CamdenIn the spring of 1917, all of Britain's attention is on the WWI war front and the thousands of young men serving their country on the front lines. Jack Benningham, dashing heir to the Earl of Stonebrooke, is young and able-bodied but refuses to enlist despite the contempt of his peers.

A wealthy young suffragette, Grace Mabry will do anything to assist her country's cause. Men like Jack infuriate her when she thinks of her own brother fighting in the trenches of France, so she has no reservations about handing him a white feather of cowardice at a posh masquerade ball.

But Grace could not anticipate the danger and betrayal set into motion by her actions, and soon she and Jack are forced to learn the true meaning of courage when the war raging overseas suddenly strikes much closer to home and their fervent beliefs become a matter of life and death.

"Set in Great Britain during the first World War, readers will feel that they have been transported to the world of Downton Abbey. With a great deal of romance, along with intrigue, espionage, and suspense, Breslin creates a tale difficult to put down until its touching, soul-satisfying ending."
RT Book Reviews

"Not by Sight" by Kate Breslin  is a book that has it all. It has suspense, crime, mystery and last but not least romance. I really liked this story from the very first page. Grace Mabry is a suffragette who also is wealthy enough to be able to do what she wants. It is 1917 and everyone is worried about WWI and all the men who are fighting for Britian. Jack Benningham is able to fight but he will not. Grace finds that horrible and she intends to let him know how she really feels. Grace's brother is fighting in France and so should he. She goes to a masquerade ball where all of the wealthy are, she walks right up and hands him a white feather to let him know what she really thinks of him. She soon finds out that she should not have done that and now she will have to fight for her own survival.  What will become of both of them?  I give this book a 4/5. I was given this book by Bethany House Publishers and all opinions a re mine.
Posted by 3 Partners in Shopping at 12:39 AM