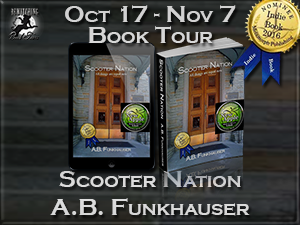 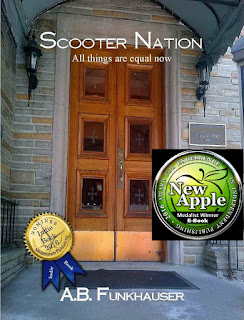 
Aging managing director Charlie Forsythe begins his work day with a phone call to Jocasta Binns, the unacknowledged illegitimate daughter of Weibigand Funeral Home founder Karl Heinz Sr. Alma Wurtz, a scooter bound sextenarian, community activist, and neighborhood pain in the ass is emptying her urine into the flower beds, killing the petunias. Jocasta cuts him off, reminding him that a staff meeting has been called. Charlie, silenced, is taken aback: he has had no prior input into the meeting and that, on its own, makes it sinister. 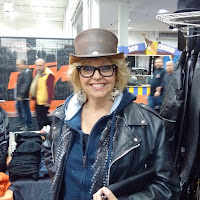 
Toronto born author A.B. Funkhauser is a funeral director, classic car nut and wildlife enthusiast living in Ontario, Canada. Like most funeral directors, she is governed by a strong sense of altruism fueled by the belief that life chooses us and we not it.

Her debut novel Heuer Lost and Found, released in April 2015, examines the day to day workings of a funeral home and the people who staff it. Winner of the Preditors & Editors Reader’s Poll for Best Horror 2015, and the New Apple EBook Award 2016 for Horror, Heuer Lost and Found is the first installment in Funkhauser’s Unapologetic Lives series. Her sophomore effort, Scooter Nation, released March 11, 2016 through Solstice Publishing. Winner of the New Apple Ebook Award 2016 for Humor, and Winner Best Humor Summer Indie Book Awards 2016, Metamorph Publishing, Scooter picks up where Heuer left off, this time with the lens on the funeral home as it falls into the hands of a woeful sybarite.

A devotee of the gonzo style pioneered by the late Hunter S. Thompson, Funkhauser attempts to shine a light on difficult subjects by aid of humorous storytelling. “In gonzo, characters operate without filters which means they say and do the kinds of things we cannot in an ordered society. Results are often comic but, hopefully, instructive.”

November 2 Spotlight
Sylv all about books and films
http://www.sylv.net