A Killer Closet by Paula Paul

A Killer Closet
by Paula Paul

A very well written story and well developed characters. This was a guessing game for me to figure out who done the killing. A great mystery to put the pieces together to.
~Books, Dreams, Life

I couldn’t put the book down. I’m definitely looking forward to the sequel!
~Island Confidential 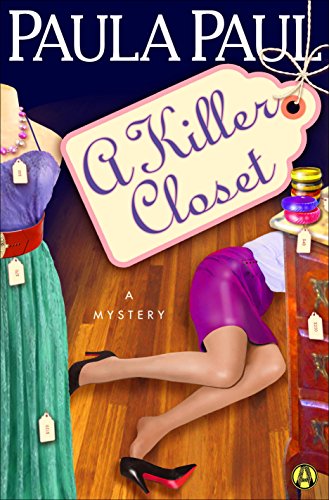 A Killer Closet: A Mystery

In a fashionably cozy short mystery novel, Paula Paul introduces a tenacious heroine who leaves big-city life behind and returns to picturesque Santa Fe, New Mexico—where murder lands on her doorstep.
Irene Seligman loves the warmth and beauty of her Southwest hometown, but only one thing could make her quit her prestigious job as an assistant district attorney in Manhattan to return there: the guilt applied by her demanding mother, Adelle. After Adelle’s most recent husband dies, leaving her with nothing, Irene decides to take a break from prosecuting criminals to move back to Santa Fe and open an upscale consignment store. With Irene’s determination and her mother’s eye for haute couture, they’re sure to make a killing.
But on the day of the grand opening, Irene discovers the body of one of Adelle’s friends in her storeroom. And although the intrigue causes business to boom, when someone else from Adelle’s social circle is murdered, Irene begins to suspect her mother might be in danger too. Ever the protective daughter, Irene investigates her mother’s friends, suspicious that they’re hiding more than designer clothes in their closets. But as she gets closer to uncovering some real skeletons, Irene might not live to regret coming home again.

Award-winning novelist Paula Paul was born on her grandparents’ cotton farm near Shallowater, Texas, and graduated from a country high school near Maple, Texas. She earned a BA in journalism and has worked as a reporter for newspapers in both Texas and New Mexico. She’s been the recipient of state and national awards for her work as a journalist as well as a novelist. She’s the author of many mysteries, including the Alexandra Gladstone series and the Mystery by Design series, which she wrote as Paula Carter. She lives in Albuquerque, New Mexico.
Author Link:
Webpage – http://www.paulapaul.net/
Purchase Links:
Amazon – B&N