The Color of Clouds by J.C. Whyte

The Color of Clouds
by J.C. Whyte

Part science fiction and paranormal. I was surprised at the different twists and turns the book took. I hated each time I had to put the book down.
~readalot
In The Color of Clouds by J.C. Whyte, there’s a whole rainbow of cloud colors going on and each one means a different thing. But clouds don’t only exist in the sky.
~Back Porchervations 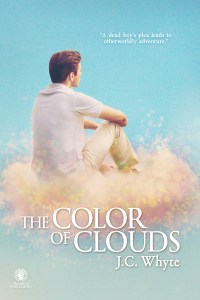 The Color of Clouds

Synopsis
Pedro’s on a mission. But not your everyday, run-of-the-mill type mission. Because Pedro is dead.
That’s right. Dead.
Spirit guide Pedro normally busies himself with conveying messages from departed loved ones through a psychic named Gwen. But when he encounters a recently deceased teenager, the boy’s anguish just about breaks Pedro’s heart. So the spirit guide decides to try and help this boy. Yet meddling in the affairs of the living is a troublesome business, as Pedro soon discovers.
Nevertheless, he convinces Gwen to take an ocean voyage, and that’s when the trouble begins. Within days of leaving port, two passengers on the cruise ship fall into a mysterious coma. Gwen seeks Pedro’s help to restore these passengers, but natural as well as unnatural obstacles keep getting in the way. And by the time the ship docks in Honolulu, the still-living are flat out scrambling for their lives!
A playful blend of science fiction and the paranormal, The Color of Clouds offers a glimpse into the unseen world while taking the reader on an extraordinary ride. The adventure includes danger, mystery, humor, sweet romance and even a dash of thriller.
But the clouds are not what you think.
EXCERPT
I’m what you call dead. That’s right—dead. And I been that way a long time.
Still hanging around though. Mostly because of my job. Guess you could say I’m self-employed.
What I do is pass along messages through a psychic named Gwen. She’s a great gal who helps people get over the loss of their loved ones. She and I connect, so to speak, to let the deceased communicate messages back to the living. Kind of helps, you know, with the grieving and all.
But first let me explain something about being a spirit guide (that’s what you living people call me). I admit I’m no angel, and I do occasionally fudge things. Not a lot, mind you, because meddling in the affairs of the living is a big no-no. Really frowned on by the higher-ups. See, we spirit guides are only allowed to meddle if some accident blows people way off course. Of their lives, that is. But that’s exactly what happened in the story I’m about to relate.
Now it all took place some years back. Not decades, mind you, just back (being dead, I tend to lose track of time). But trust me—everything’s true and accurate in this story. That’s because the dimension I now inhabit allows unlimited access to information. So I got the inside scoop on the story.
But let me start at the beginning. This teenager, see, he passed over. I mean, of course, he died. But the way he died was very troubling to the boy. Because painful issues were left unresolved. And it was driving this kid crazy. So he found me. And wouldn’t you know, his story just broke my heart. Because he reminded me of myself at that age, back when I was a young hooligan in the early part of the twentieth century.
This kid told me all about the big blowup he’d had with his dad, and what resulted from it. Poor kid—to have your life cut short like that. I figured that was plenty enough for the boy to handle. But having to witness the guilt and sorrow his death caused those left behind...well, I could plainly see this was killing the kid—in a manner of speaking, of course.
So I agreed to help. And that was what sent me off on a very unusual journey. Actually, it was more like an adventure involving a whole lot of still-living people.
Now from the viewpoint of the living, my journey really began with the cruise ship Viking Maiden. It was leaving port in Sydney, Australia for a twenty-one day ocean crossing to San Diego when the captain received weather reports of developing storms—typhoons, really—forming in the South Pacific. So the captain decided to alter the Maiden’s course to avoid the storms. This decision would take the ship hundreds of miles north of its scheduled route.
Oh. Forgive me for not introducing myself—name’s Pedro. 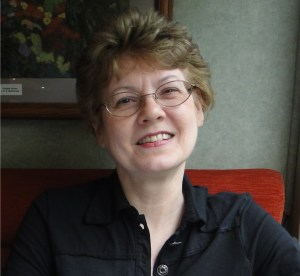 J.C. Whyte discovered her love for writing while still in elementary school, creating children’s stories. But as an adult, J.C. had to face the harsh reality that such writing seldom pays the bills. So she earned degrees in both Journalism and Communications, and then turned to Public Relations, where for ten years she focused her creative energies into feature writing.
After marriage, kids, several more degrees and occupations (including stints as a travel agent and paralegal), J. C. entered law school. While there, she became a columnist for the school newsletter and later, one of her humorous articles was even published in The National Jurist.
Graduating and passing the Bar, J.C. realized within a few short years that creative writing was still what made her heart sing. So now, as a grandma, she has returned to where her life’s calling began, beginning in 2013 with publication of her children’s book Karmack and now in 2015 with her first novel for adults, The Color of Clouds.
GoodReads link:
https://www.goodreads.com/book/show/25256886-the-color-of-clouds
Purchase Links:
Amazon