It really doesn’t get much better than this. This was a totally fun cozy…
~A Chick Who Reads
…fun mystery to read while sitting outside taking in the fresh air or lounging by the pool. I’m looking forward to visiting Tallulah Falls again.
~fuonlyknew

This was a fun cozy and I love the setting of Tallulah Falls. I felt like I was visiting old friends.
~Brooke Blogs 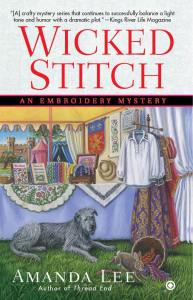 
When murder strikes the small town of Tallulah Falls, embroidery shop owner Marcy Singer isn’t afraid of getting into the knitty-gritty to clear her own name…
For most small-business owners in Tallulah Falls, the upcoming Renaissance Faire is a wonderful way to promote their specialty shops. For Marcy’s nemesis, Nellie, and her sister Clara, it’s an opportunity to finally put Marcy and her shop, the Seven-Year Stitch, out of business. Apparently the sisters like to keep their grudges all in the family and have set up a competing booth right next to Marcy’s at the Faire.
When Clara is discovered dead in her own booth—strangled by the scarf she had almost finished knitting—Marcy becomes the prime suspect. Now she has to do whatever it takes to keep her reputation from unraveling and get to the bottom of a most deadly yarn… 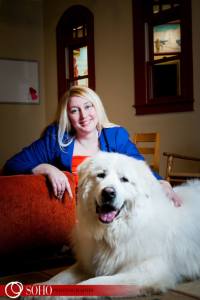 About This Author
Gayle Trent (writing as Amanda Lee) writes the embroidery mystery series. The series features a heroine who recently moved to the Oregon coast to open an embroidery specialty shop. Marcy Singer left her home in San Francisco, along with the humiliation of being left at the altar, in order to move to Tallulah Falls and realize her dream of owning her own shop. She takes along her faithful companion, a one-year-old Irish wolfhound named Angus O’Ruff. She makes many new friends in Tallulah Falls, but she also makes a few enemies. Thankfully, her best friend Sadie MacKenzie and her husband Blake run the coffeehouse right down the street from Marcy’s shop, the Seven-Year Stitch; and Detective Ted Nash always has her back. Gayle/Amanda lives in Virginia when she’s not inhabiting the fictional world of Tallulah Falls.
Author  Links
http://www.gayletrent.com
https://www.facebook.com/GayleTrentandAmandaLee
https://twitter.com/GayleTrent
https://www.goodreads.com/author/show/426208.Gayle_Trent
Purchase Links
Amazon


Guest Post;
3 Partners in Shopping, Nana, Mommy, & Sissy, Too! would like to thank author Amanda Lee for sharing her thoughts us.

I love bunnies. Our family once had a white lop-eared rabbit named Bun. I bought Bun from an Amish boy who was selling rabbits at a local farmers’ market. I’d left my purse in the car and had asked him to hold the white bunny for me until I returned. When I came back with my money, the child took the rabbit from his pocket and handed it to me. I immediately fell in love with the bunny—and with the child. I wanted to take both home, but my husband would only let me take the rabbit I’d bought. He refused to be an accessory to kidnapping. Spoil sport. Anyway, Bun was wonderful. We could let the rabbit out into the backyard and then call him when we were ready to go inside. So Clover is loosely based on Bun. In the book, Angus the Irish wolfhound loves Clover and the feeling is mutual.

My young son was knighted Sir Scooby of Doo by the Queen because he was wearing a Scooby Doo shirt. She knighted him with a plunger. This was immediately after the human chess game. There was an English professor at the fair who was dressed as William Shakespeare. There was also a falconer and a man who played music on water glasses. We had a fun day, and I want to go back to a Renaissance Faire, especially after writing Wicked Stitch and getting so immersed in the research.

Have you seen Reign? I know it really stretches historic credibility—for one thing, the real Frances died during the first year he was married to Mary—but the show has never claimed to be a documentary. I love the costumes! And the romance! And the suspense! But I wish they’d bring back Nostradamus. I miss him.

Some of my favorites are the thieves blend, peace and calming, and a roll-on essential oil blend for stress release. And, of course, lavender is so nice when you need to relax and get some sleep.

I need to see if I can find it and determine if it’s in suitable condition to wear to a Wicked Stitch signing. Wouldn’t that be fun? I also had the French hood that I made myself. It actually turned out well. My gown was made of dark green velvet, and it was beautiful but very heavy! So what about you? Do you like playing dress-up?

: a Rafflecopter giveaway
Posted by 3 Partners in Shopping at 12:15 AM