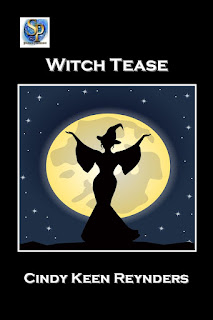 Tagline: Elizabeth, “Lizzie” Rose, high witch of the Wysteria Hedge Haven Clan, must enlist the assistance of her former lover, Kincaid McAllister, the famous Spirit Wulver, to save her coven from a banshee attack.

As the Wysteria Hedge Haven Clan prepares to celebrate Mabon (autumn equinox) by holding a “Blessing of the Brooms” ceremony at the Royal Witch Arena, a banshee swarm attacks. While clan members are held captive, the banshee leader, Sorcha, barters with the Supreme Witch’s Council to bestow life to her group within the next 48 hours.

Elizabeth “Lizzie” Rose, high witch of the Wysteria Hedge Haven Clan, has recently been running late to coven events. She arrives at the arena after the banshees’ attack, and manages to escape.

She hires the famous Spirit Wulver, who is known in the magical world for dispatching demons and evil spirits. When he arrives, she realizes it is Kincaid McAllister—the same man she fell in love with centuries ago, back in Scotland.

Kincaid and Lizzie set aside their personal feelings in order to save her clan. Unfortunately, Kincaid’s typical pest exterminations fail. As a last resort, he plans to travel to the Land of the Fae to consult with the Faery King to determine the best way to get rid of Sorcha’s gang.

Despite the dangers, Lizzie insists on going with Kincaid. After rekindling their love, the two vow to spend their lives together. They find Uaithne; a magical harp that will destroy the banshees. Possession of the item requires the sacrifice of a life. To Lizzie’s dismay, Kincaid offers his.

Refusing to accept Kincaid’s fate, she frees her clan, then begins the process of returning to the Land of the Fae where she hopes to free her lover. Hopefully, Lizzie’s timeless love for Kincaid will unlock powerful magic to fuel her quest.

Cindy Keen Reynders is a contributing editor and staff writer for LCSD1’s Public Schools’ Chronicle. She worked as a book critic for Storyteller Alley and has published articles with True West and Wild West magazines.

She is the author of mysteries The Saucy Lucy Murders, Paws-itively Guilty and A Killer Slice. Additionally, Solstice Publishing released The Seven-Year Witch in March, 2019. The second book about the Wysteria Hedge Haven Clan sisters is, A Witch at Midnight, which was released in July, 2019. Witch Tease, is the next book in the series.

Besides reading, writing and crocheting, Cindy’s favorite activity is seeing new places. She was born in Portland, Oregon and has lived all over the United States and in Misawa, Japan. She has visited Canada, the Philippines, Samoa, Hawaii, both the western and eastern Caribbean and New Zealand.

From baby alligators to glow worms, Cindy has seen a variety of life’s wonders.