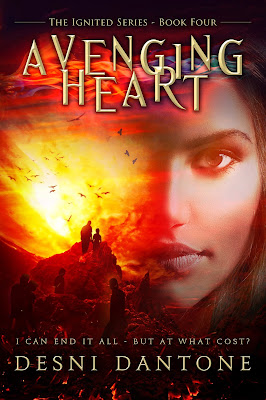 Kris Young wants nothing more than to be a normal girl. Thrust into a life she didn’t ask for, and faced with a future that she does not want, she sets off an adventure that she hopes will lead to her freedom. With her best friend’s life, the future of the Kala-Skotadi war, and her own soul at stake, failure is not an option.Old and new allies unite on a quest against the demigods and Kris’s half-sister, Circe, the mastermind behind it all. Together, they fight to sever Kris and Alec from their evil ties once and for all, and rescue Callie from her own doomed fate. But Circe has other plans for them.When an unexpected loss strikes the group, will Kris lose the will to go on? Or will a need for vengeance drive her to finally succeed?Find out how the story of Kris, Nathan, Alec, and Callie will end in the epic conclusion to The Ignited Series, where, in the race against time and evil, all bets are off . . . and no one is safe.


“Good!” He flexed his fingers as he held his hands out to me. “Again.”


I swung, and connected my fist with his open palm with a crack. God, it felt good.


“Combo,” he instructed, and I jabbed both of his palms.


I struck him as he instructed, and winced from the sting to my knuckles.


“You can do better than that.” I tried again, and he shook his head. “You call that a punch?”


“You know what?” I dropped my arms to my sides with a groan. “My arms feel like Jell-O. How do you expect me to punch with Jell-O arms?”


Nathan stared at me over his hands, which were still raised expectantly. “You done?”


“Yes, I’m done.” I turned away with a sigh of relief. I was eager for a much needed break, and a shower. We had started over an hour ago with a run before the sun rose. After an ungodly number of sit-ups, push-ups, and fighting drills, I was so done.


I glared at him over my shoulder, and he raised his eyebrows in challenge. I blew out a puff of air, and shook some life back into my arms as I turned to face him with narrowed eyes.


He was going to pay for that.


My right fist cracked his palm hard. As I rotated, I pulled my left arm back with the intention of giving him everything I had. Before I made contact, Nathan’s hand shot out and clamped down on my wrist, stopping my follow through. My eyes lifted to his in time to see the smirk on his face before he twisted my arm behind my back and spun me around.


I ignored the shivers caused by his breath on my neck, and wrapped my right arm around his head as I twisted out of his hold. At the same time, I kicked my leg out. He grabbed it with his free hand before I could connect, and I lost my balance.


And he’s coming with me.


I attempted a twist that would land him beneath me, so that I could claim bragging rights, but it didn’t happen. I ended up with my back on the sand, and Nathan kneeling over me in total control.


“Ugh!” I threw my head back with a groan. “How do you always manage to take me down first?”


Nathan brushed a speck of sand off my forehead with a grin. “You think too much. Just do it.”


“Me? Think too much?” Had he forgotten who he was talking to? The girl who notoriously acted first, and thought second.


“You’ve got the potential. You’re definitely a lot stronger than you were,” he praised.


“I’m still more practiced than you,” he returned with a small chuckle. “I don’t think about my moves. I just do them. You’re concentrating too much on getting everything perfect. That distracts you.”


“Hmm.” I bit my lip as I peered into his eyes, a silver-ringed blue that rivaled the most pristine of oceans. “You know what’s distracting me right now?” 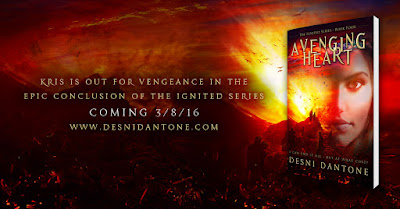 About the Author
I live in the quiet, middle-of-nowhere Everett, Pennsylvania with my husband and three sons.I've been writing since I was eleven, after I swiped one of my mom's Dean Koontz books. I still remember the first one I read; it was called Darkfall, and kept me awake most of the night. Anyway, I was totally inspired when I learned that he came from the small rural town I called home (true story, I swear!), and started writing freaky little horror stories because I wanted to be just like him. I gave the stories to my mom to read. I don't think she was as impressed as I was, but she put on an encouraging face...and that was how my writing obsession started. After years of writing for a hobby and taking creative writing courses, I've published my first novel, Ignited. My dream is for Dean Koontz to no longer be the only bestselling author from my little middle-of-nowhere hometown. You can check out more about me, The Ignited Series, and my upcoming books as they become available at:http://www.desnidantone.comhttp://www.facebook.com/ignitedbooks
Author Links: