Lost Under A Ladder
by Linda O. Johnston

Lost Under a Ladder is an engaging light mystery….
~The Bookwyrm’s Hoard
I really enjoyed this mystery and I liked getting to know Rory and her dog, Pluckie…The mystery was well-written and engaging and I’m looking forward to spending more time with the residents of Destiny in future books. I love Ms. Johnston’s books and Lost Under A Ladder is a great start to what will be a very charming series.
~Books-n-Kisses 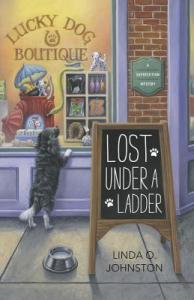 Lost Under a Ladder
(A Superstition Mystery)

Are superstitions real? Rory Chasen doesn’t think so–until her beloved fiance walks under a ladder and is killed by a car five minutes later. Needing closure, Rory takes her dog Pluckie to a town called Destiny, where superstitions are a way of life.
Rory’s visit to Destiny takes an unexpected turn when Pluckie saves the life of Martha, the owner of the Lucky Dog Boutique. To show her gratitude, Martha offers Rory a job at the pet store. But when Martha becomes the prime suspect in the murder of the local bookshop owner, Rory refuses to believe that she would do it. Rory is convinced the real killer still roams Destiny’s streets, and she must uncover the truth before Martha is hauled off to jail. 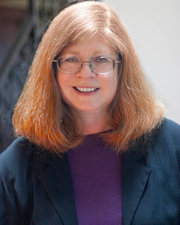 Linda O. Johnston’s first published fiction appeared in Ellery Queen’s Mystery Magazine and won the Robert L. Fish Memorial Award for Best First Mystery Short Story of the year.   Since then, Linda, a former lawyer who is now a full-time writer, has published more short stories, novellas, and 37 romance and mystery novels, including the Pet Rescue Mystery Series, a spinoff from her Kendra Ballantyne, Pet-Sitter mysteries for Berkley Prime Crime, plus Harlequin Romantic Suspense as well as the Alpha Force paranormal romance miniseries for Harlequin Nocturne.
Her latest cozy mystery series, the Superstition Mysteries from Midnight Ink, kicks off in October 2014 with LOST UNDER A LADDER.  Linda believes that reading the Superstition Mysteries will bring good luck!


I'm excited. My fingers are crossed that all goes well. I've been knocking on wood like crazy to encourage good luck.


Why? Because my new Superstition Mystery series is about to begin! LOST UNDER A LADDER is an October release.


It's far from being my first book, and the Superstition Mysteries aren't my first series. I've written the Kendra Ballantyne, Pet-Sitter mysteries as well as the spin-off Pet Rescue mysteries for Berkley Prime Crime. Plus, I also write mini-series for two Harlequin Romance series, Harlequin Nocturne and Harlequin Romantic Suspense.


But the Superstition Mysteries are my first series for Midnight Ink. And... there's a lot about superstitions in them!


Pets, too, of course. Both of my other mystery series involved them, mostly dogs. Same goes for the Superstition Mysteries.


Here's the background of LOST UNDER A LADDER:


Protagonist Rory Chasen is trying to find out the reality of superstitions--because it's important to her to learn whether the reason her beloved fiancé Warren died was bad luck because he walked under a ladder. Did that cause the car to hit him a couple of minutes later? She doesn't know. She wants to learn, though, because that may be the only way she gets closure.


That's why Rory decides to visit Destiny, California, a town that is all about superstitions. Maybe she can find answers there.


But at first she finds more questions than answers. She brings her adorable black and white dog Pluckie along, and soon after they arrive Pluckie helps to save the life of Martha Jallopia, a senior woman who has collapsed in the back of the Lucky Dog Boutique. Martha, taking a look at Pluckie, knows she's going to be just fine since seeing a black and white dog is lucky, especially if the person is on her way to a business meeting. But Martha also asks Rory to run the Lucky Dog for her while she gets well. Back home, Rory was a manager for a pet store in a large chain, so she reluctantly agrees. And when Martha is later accused of murder, Rory has to help to clear her new friend... with Pluckie's help.

Why am I so into dogs? Well, just like writing is part of who I am, so is my love of dogs. Both originated when I was a kid and have been growing ever since.


My own two dogs Lexie and Mystie rule my life. They're Cavalier King Charles Spaniels, one of the most loving breeds. They have me well trained. As I write this, they're nearby watching out the front gate for a neighbor who always gives them treats when she and her dog walk by. But when they bark to go outside for a romp, I'll hop to and obey them!


Rory's dog Pluckie is good at communicating, too--especially when she becomes aware of a body. The first one, at least, was Martha, who survived. But later in LOST UNDER A LADDER? Not all the people whose bodies Pluckie finds is as lucky.


I'm hoping it'll be good luck to read LOST UNDER A LADDER. Why don't you give it a try and find out! :)


Many thanks to 3 Partners in Shopping, Nana, Mommy & Sissy, Too for inviting me to blog here on my Great Escapes Virtual Tour!


Here is the code: a Rafflecopter giveaway
Posted by 3 Partners in Shopping at 12:36 AM