Onyx Webb Book One by Richard Fenton and Andrea Waltz


A multi-genre mash-up that combines elements of supernatural suspense, crime, horror, romance, and more. The Onyx Webb series follows the unusual life of Onyx Webb along with a central group of characters in various locations and times. The billionaire Mulvaney family, piano prodigy Juniper Cole and her brother Quinn, paranormal show hosts Cryer and Fudge, and a few others make up the core of the series.


Written like a book version of a supernatural soap opera, each character’s story moves forward with most every episode. It may appear that the characters are entirely unrelated and yet episode by episode, the connections will become clearer. Like being an inch away from a spider web, with each book, the web will move further and further away revealing the full story of every character and most importantly, the stunning conclusion for Onyx Webb herself. 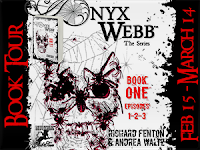 
Richard Fenton & Andrea Waltz are best known as the authors of Go for No! (which hit #1 on Amazon’s Sales & Selling list and has remained in the Top 10 for the last five years.) They are also professional speakers who speak internationally to audiences on how to overcome fear of failure and rejection.


Although all of their business books are fables, the Onyx Webb series is their first serious dive into fiction.


But Richard and Andrea have been in love with creating stories together since they met almost twenty years ago and even spent some time in Hollywood writing screenplays, being represented by the producer of Breakfast at Tiffany’s.